Agreements Signed With Cambridge And Students From Serbia 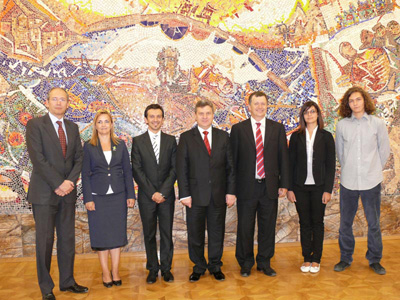 On 3 September 2010, the President of Macedonia, Gjorge Ivanov met with Michael O’Sullivan, Mihail Petreski and Vanja Mirkovski of PEXIM Foundation, and recipients of PEXIM Cambridge scholarships from Macedonia, Damjan Denkovski, Ivana Mateska and Aleksandra Mitov at his residence.  President Ivanov talked with PEXIM Foundation and COT about future activities and possible areas of cooperation.

On that occasion, Macedonian President emphasized that PEXIM Foundation’s initiative is extremely important as it comes from the private sector and aims at increasing Macedonia’s capacities for European integrations and economic strengthening through providing support to talented youth who will be running the country in the near future.  As the President stated, the PEXIM Foundation’s goals have a lot in common with “Training for Young Leaders”, initiative which he directly supports in order to empower theoretical and practical leadership of Macedonian youth.

“To develop leaders able and ready to lead the country, constant investments in their development and education must be made”, said President Ivanov.  The idea behind initiating the “Training for Young Leaders” is that personal commitment and personal responsibility should be supported by collective commitment and responsibility to support the best, those who will lead the country tomorrow, and that the society which today cares for its young leaders tomorrow will be headed by the same people it has invested in.  In this endeavour, the PEXIM Foundation and the Government of Macedonia are partners which are creating real value through concerted and joint efforts.

The fact that one of the PEXIM Cambridge scholars, Aleksandar Mitov, has this year attended Young Leaders seminars and workshops held in Ohrid testifies of the perfect match between the goals of PEXIM scholarships and President’s “Training for Young Leaders”.

President Ivanov warmly welcomed Director of Cambridge Overseas Trust, Michael O’Sullivan to Macedonia and expressed his willingness to support efforts of COT and PEXIM Foundation to create a climate in Macedonia which is favourable to open minds, which will enable effective learning and quality upgrading, and which will provide the latest research and studies in the political, economic and sociological theory and practice.