Kapital: Interview with Mihail Petreski, Founder of PEXIM and Vice President of Asseco

Start of the Semester 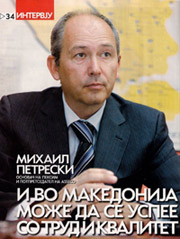 Mihail Petreski is known to the Macedonian public as the founder of PEXIM.  Two years ago, PEXIM got new owners.  Its founder decided that the company he established over 20 years ago should continue its success story as part of a larger group that will take the company to a higher level of development.

Thus, PEXIM became part of Asseco Group, which is among the five largest software companies in Europe.  For some, this is an excellent example of successful development of a company because the most common fate of companies founded by one person is to fade away after they reach its maximum development.  Especially in Macedonia where the directors and owners are not keen to give up the leadership position, not even thinking to give up majority ownership of the company for increasing development.  However, the facts show that PEXIM is a truly successful Macedonian story.  Under the leadership of Mihail Petreski, PEXIM, a small company with few employees, became a leader in the banking industry IT business and a real corporation with an income of over 20 million Euros and more than 500 employees in Macedonia and the countries of the region.

“At one point, PEXIM grew into a corporation that needed corporate management, and entrepreneurial management style was no longer effective.  If you already grew into a corporation, then you should behave and manage the company properly.  I thought it would be best for PEXIM to become a part of another larger corporation that has already established such procedures.  At that time, and even now, I’m convinced that we have done high altitude step,” explains Petreski.

The key to PEXIM’s success, according to him, is the clear vision of where the company is moving and making the right decisions at the right time.  For Petreski, important quality of a manager is a vision that brings excitement and the ability and enthusiasm to convey it to your associates and clients.

Petreski is one of those managers who manage and govern with authority based on the expertise, experience, understanding and respect.  Such managers are rare, especially in Macedonia.  Therefore, it should not be surprising that, as the biggest success in his professional career, he did not state the high profit, but that people and associates who were with him at the point when he started to build the company are still with him now.

Except for the road to success of PEXIM, we talked with Mihail Petreski about the effects of the crisis, plans of Asseco Group, the idea behind the PEXIM Foundation and his view on how to improve the management in the country.

“The idea was to make a foundation, put my own money into it, and then, invite others who share my values to join so that we can achieve the goal of PEXIM Foundation together.  The aim is to create future leaders of Macedonian society that will reduce and bridge the gap between European Union and Macedonia.  When you have people who are educated at prestigious universities, they are without complexes and able to sit at same table with any representative of European country or any country, as equal partners.  I think that is exactly what we lack at this point – someone who will be able to approach the world in the right way, someone who will bring our traditional values to the world.  To that end I will invest up to 500,000 Euros, that will be used to award scholarships to study abroad.  This year, along with Cambridge, we have spent about 145,000 Euros for scholarships to students who enrolled at this prestigious university.  One half of that money was given by the Foundation, and the other half by Cambridge Overseas Trust Fund.  Following that logic, the Foundation will surely live for at least five years.  I expect that my idea will be accepted by other business people, and that together we’ll be able to provide more scholarships for those who succeed to enroll at the world’s best universities.  In that respect, I think that the public-private partnerships have yet to stimulate these areas.  They are characteristic of mature civil societies.  People who earned money in one field, have a natural need to return to the society in some way, so whether through monuments, buildings, churches or foundations.  All these initiatives are welcome if the intentions are honest”, stated Mihail Petreski, the Founder of PEXIM Foundation.