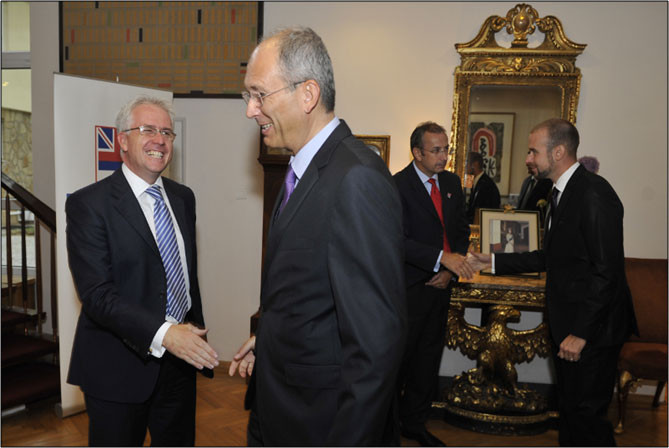 On Thursday, 6 September 2012, HMA Michael Davenport hosted in his residence members of the British companies present in Serbia, their key partners and officials of the Serbian Government.  The immediate cause for this gathering was the visit of Sir Paul Judge, President of the British-Serbian Chamber of Commerce.

Ambassador Davenport greeted the guests and stated importance of networking, fostering business relations and the work of the British-Serbian Chamber of Commerce in the year when Great Britain and Serbia celebrate 175th anniversary of their bilateral relations.

At the event, Ambassador emphasized strong academic cooperation between Great Britain and Serbia: „Since 2010, approximately 1,500 Serbian students decided to study in prestigious British universities.  A part of this cooperation is the UK Government scholarship program – Chevening – which will send four new students to UK next year.  Our goal is to support Serbia in practical terms as these students will return to Serbia with degrees from some of the best universities worldwide and will have a chance to significantly contribute to Serbia’s development.“

President of the British-Serbian Chamber of Commerce, Sir Paul Judge possesses extensive experience in private and public sector, as well as in the politics in the UK.  He is the founder of the Judge Business School at the University of Cambridge, honorable member or guest lecturer at numerous UK and world universities.

Speaking about education, Sir Paul said: “It was an honor for me to receive earlier today an honorary doctorate from the University of Belgrade and I will continue to work on establishing partnerships between Serbian and British academic institutions.  I am pleased to see all the efforts invested in order to develop talents of Serbian students abroad and have them use these skills once they return to Serbia to shape its future.”

Sir Paul also turned his attention to the activities of PEXIM Foundation. “PEXIM Foundation, in cooperation with Cambridge Overseas Trust to date invested 350,000 EUR into scholarships for its 11 Master students and it continues to expand its program.  We’ve recently organized the first gathering of Serbian students in Cambridge at the Trinity College”, said Sir Paul.

Key note speakers at the event were also James Thornley, Director of Belgrade office of KPMG and Vice President of the British-Serbian Chamber of Commerce, and David Thomas, President of COBCOE, the Association of British Chambers of Commerce in Europe.

During his visit to Serbia, Sir Paul Judge will have bilateral meetings with senior Serbian officials, including President Tomislav Nikolic and Prime Minister Ivica Dacic.