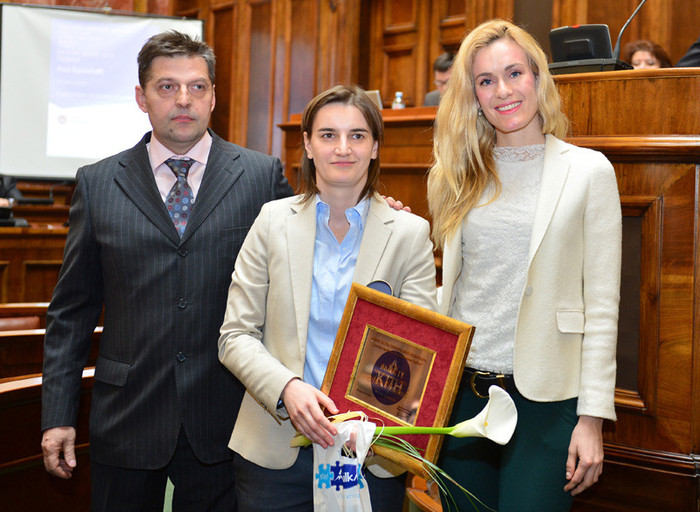 The Club of Economic Journalists (KPN) presented the Executive Director of the PEXIM Foundation, Ana Brnabic, the “Business Woman of the Year” award for 2012 in the Corporate-Social Responsibility (CSR) category. The award is provided under the auspices of Mr. Nebojsa Stefanovic, President of the Parliament of Serbia, and was presented at the official ceremony on 28 March 2013 in the Serbian Parliament.  In three years of its work, the PEXIM Foundation invested over 350,000 EUR in the PEXIM Cambridge scholarship programme for twelve students from Serbia and Macedonia.

The panel of judges, presided over by Ms. Mirjana Stevanovic, Editor of the Economy Section of the national daily “Danas”, emphasized in the explanation of the award: “Appreciating the work of Ana Brnabic, investment of the PEXIM Foundation in education of young people during their studies at Cambridge, and an effort that they return to their country, Ana Brnabic has been, as Executive Director of the PEXIM Foundation, nominated and selected as the Business Woman of the Year in the CSR category”.

Ana Brnabić, MBA (University of Hull), has been the Executive Director of the PEXIM Foundation since its establishment in 2010.  She is also Director of the Continental Wind Serbia (CWS), part of the US company Continental Wind Partners (CWP), which is present in Serbia since 2009 and works on development of wind farm in the municipality of Kovin, an investment worth 300 million EUR.  Continental Wind itself employed two students who returned from Cambridge in order to utilize their knowledge and skills in Serbia and offer them a professional carrier in this emerging industry.  She is also authorized representative of the Serbian Wind Energy Association (SEWEA).  In the CSR field, Ana is the President of the Advisory Board of Ethno Network and actively supports and cooperates with the National Alliance for Local Economic Development (NALED) as the most effective organization for advocating the interests of the business sector, local governments and civil sector in Serbia.

This is the fourth consecutive year that the Club of Economic Journalists organizes the manifestation “Business Woman of the Year”. The awards were presented to women who have shown their creativity in business, and those who have turned their creativity into business.