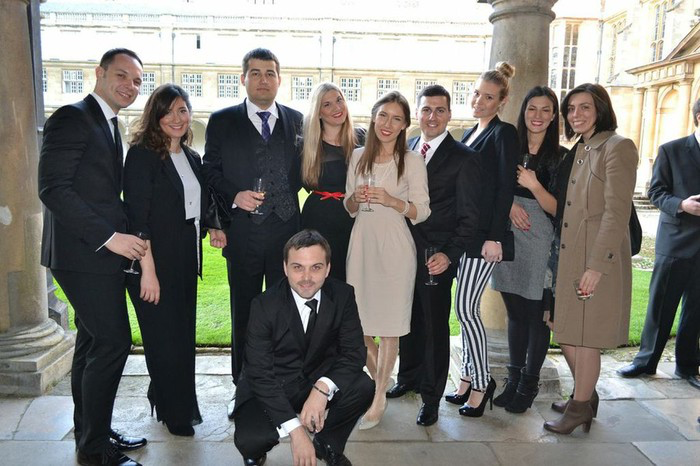 The second annual British-Serbian dinner at Cambridge was held in the Old Kitchens of the Trinity College, University of Cambridge, on 2 May 2013. The dinner gathered together Sir Paul Judge, Chairman of the British-Serbian Chamber of Commerce, Mihail Petreski, Founder and President of the PEXIM Foundation, Nenad Borovcanin, State Secretary in the Government of Serbia Ministry of Youth and Sports, and Michael Davenport, UK Ambassador to Serbia.  Approximately fifty Serbian students in Cambridge attended the dinner.

The dinner was initiated in 2012 by Sir Paul Judge, himself a Cambridge scholar and principal benefactor of the Judge Business School at Cambridge, and the scholars of the PEXIM Foundation. The principal aim of the event is to raise the visibility of Serbia in this prestigious university, initiate networking amongst the students, bring talented students closer to businesses in Serbia and investors interested in Serbia, and, overall, conduct an event which will represent modern Serbia’s image. This year’s dinner strengthened the collaboration between the British-Serbian Chamber of Commerce and Cambridge scholars of Serbian origin.  The British-Serbian Chamber of Commerce has logistically and financially helped the event with PEXIM alumni-volunteers so that student attendees are given an impulse that their expertise is welcome and that they can count on Chambers’ support for their ideas concerning entrepreneurship, branding, business or British-Serbian relations in general.

This year, the event was also attended by representatives of companies, such as Nordeus, Microsoft, PricewaterhouseCoopers, MK Group, and others, interested in facilitating students’ return to their country.  These companies supported the event financially and opened the gate for other institutions to participate in years to come. The Nordeus representatives, who were the main event sponsors, provided the gifts for all guests and expressed special interest in recruiting Cambridge talent from Serbia in the field of engineering, IT and business development. Nordeus was founded by experts who returned to Serbia at the peak of successful international careers and provides a brilliant start-up and business model for driven Serbian youth that wants to make a difference.

All the key note speakers – Sir Paul Judge, Mihail Petreski, Nenad Borovcanin and Michel Davenport – agreed that this is an important initiative which should be fostered in the future and thanked the students of the PEXIM Foundation for organizing it.

Sir Paul Judge expressed pleasure that the cooperation between Cambridge University and PEXIM Foundation gets stronger and that the number of attendees expanded since last Mayꞌs dinner.  Mihail Petreski invited the company representatives to continue supporting the PEXIM Foundation and possibly create jointly scholarship programs in the future.  Nenad Borovcanin stated his personal readiness and the readiness of the Ministry of Youth and Sports to help our students at world-wide Universities with degree nostrification and implementation of their knowledge in Serbia.  Michael Davenport, UK Ambassador to Serbia, emphasized the links between Serbia and the UK in the current and historic context, as he was touched by the students’ gift, Louise Miller’s novel “Fine Brother” about Serbian soldier and nurse Flora Sandes.

As a curiosity – this is the first time in the 700-year old tradition of the Old Kitchens of the Trinity College and the Trinity Gardens that the Serbian wine was served.  This was yet another way of promoting Serbia, its strengths and tradition.  Along with the dinner prepared by hospitable Trinity College catering, the guests savoured the awarded Traminac Wine (Gold Medal at Royal Wine Challenge 2010 in Serbia), and the Sauvignon Akacia Incognito, with the courtesy of Tomcat Celler (Mačkov podrum) as well as the sparkling Rose wine with the courtesy of Bacina Valley (Bačina Dolina).

The third British-Serbian dinner at Cambridge will be organized in May next year.