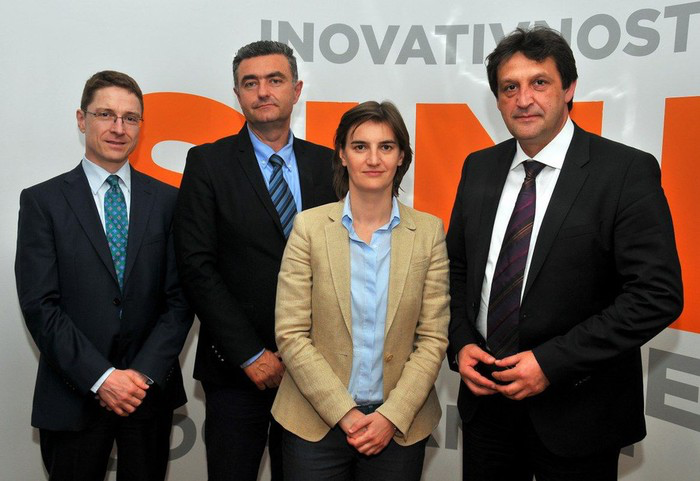 On 18 April 2013 at “Kamena sala” Hall of the Ministry of Finance and Economy, National Alliance for Local Economic Development (NALED) held its Election Assembly and elected the new Managing Board with a term of two years. Proportional to the membership structure, the Managing Board consists of nine members, including five members from companies, three from local governments and one member from civil society organizations.

With votes of present members at the Assembly session (89), the appointed members are as follows:

At the first Managing Board session, the new Presidency was appointed with Vladan Atanasijević of Asseco SEE as the new President, and Ana Brnabić of PEXIM Foundation, as the Vice President on behalf of civil society organizations, Ramon Weidinger of Coca-Cola Hellenic on behalf of corporate sector, and Bratislav Gašić, Mayor of Kruševac, as the Vice President for local government sector.

Vladimir Čupić, the former President of NALED, congratulated the newly appointed members, pointing out that they have a difficult task ahead of them, to make NALED indispensable partner of the Serbian Government and state institutions for all topics regarding local economic development and better business conditions.  He thanked NALED members, the Government of Serbia, EU Delegation, USAID, GIZ, as well as the media, for their support and cooperation and emphasized that NALED still had a lot of ideas and recommendations for the Government, particularly in terms of forthcoming reforms of labor legislation and system for issuing building permits.

The Minister of Finance and Economy Mlađan Dinkić thanked NALED for reform recommendations he had been receiving ever since the Alliance was founded and reminded that in the previous year these recommendations served as a basis for eliminating 138 para-fiscal charges. Dinkić also praised the business opinion survey NALED performs on a quarterly basis, where the businesses evaluate the work of ministers, stressing that it was important for the Government to be in touch with businesses in this manner as well.

“NALED started from scratch, and today it is the most important institution in Serbia fighting for better business conditions. Innovative recommendations made by NALED meant a lot to those local governments that accepted them, in attracting more investments.” – said Minister Dinkić.

The Head of EU Delegation to Serbia Vincent Degert said that NALED is a special and unique organization since it brings together all three sectors of the society (private, public and civil) which is very important for economic development. He stressed that, in this direction, the Alliance has achieved a lot on the local level. As some of the key challenges for Serbia in the forthcoming period Degert pointed out the reform of Labor Law and reduction of grey economy, and expressed confidence in the fact that NALED can offer its expertise in these fields to the Governments.