Serbia and the UK United in Cambridge for the Third Time

UK and its Allies, a Century after the Great War: Leadership through Peace 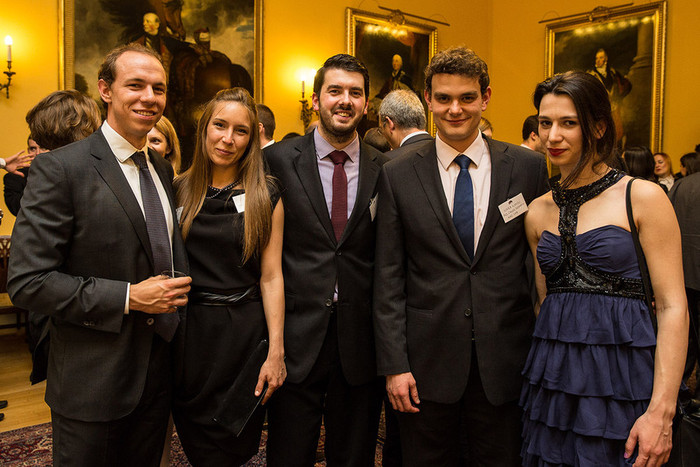 Scholars of PEXIM Foundation and Cambridge University alumni, with the support of British-Serbian Chamber of Commerce (BSCC), organised the third annual PEXIM-BSCC Dinner at Trinity College in Cambridge on May 8. The aim of the annual dinner which has been organised since 2012 in cooperation of PEXIM Foundation and BSCC is to promote Serbian students at Cambridge with potential employers so that their return to Serbia upon graduation is stimulated.

Apart from outstanding students, the remarkable number of prominent guests from Serbia, Macedonia and Great Britain, participated at the dinner. The guests were greeted by the following honorary speakers: Sir Paul Judge, the founder of Cambridge Judge Business School and BSCC President; Mihail Petreski, the Founder of PEXIM Foundation and Board Member of Asseco: Ognjen Pribićević, Serbian Ambassador to The UK; Denis Keefe, UK Ambassador-Designate to Serbia; Helen Pennant, President of Cambridge Commonwealth, European and International Trust; Mark Crandall, the President of Continental Wind Partners (CWP).

Ten leading companies from Serbia, Macedonia and United Kingdom, some of them BSCC members, had the opportunity to meet students and network with other guests from business, academia and diplomacy. The major sponsors of PEXIM-BSCC Dinner were: Continental Wind Partners, NIS, Comfy Angel, Infobip, Arex Marzipan, Microsoft, Freshfields,Zolfo Cooper.

At the Dinner, US investor Continental Wind Partners (CWP) announced partnership with PEXIM Foundation and that CWP will invest annually around EUR 14,000 for additional scholarships for the students who got admitted to Cambridge. As Mark Crandall said, ‘‘Through program CWP PEXIM Scholarship we will fund scholars in the field of energy, engineering, environmental protection, but also finance and law to support Serbia’s European integration and economic development. We decided to support PEXIM Foundation for two reasons: because our two employees, Cambridge graduates Tijana Gajić and Željko Đurić were amazing and essential part of our core team. Secondly, we see this initiative as one of the best ways to support both Serbia and Macedonia.  There is no greater and wiser investment than the one in education.  Our plan is to stay in Serbia for a long time and it is in both our professional and our personal interest that Serbia grows and develops as fast as possible.’’

Another sponsor of PEXIM-BSCC Dinner, NIS company helps Serbian students to obtain their education at world-class universities, and upon graduation they return their knowledge to Serbia as they become interns and employees of NIS. Snežana Lakićević, The Manager for Cooperation with Universities, stated, ’’It’s been a great pleasure to participate at the donor dinner at Cambridge and we thank you for this opportunity. The event has showcased that there are Companies and people who believe that investments in education and science are a steady way towards overcoming problems, reforming society and exiting the crisis. By behaving in such a way we influence the change of the value system and we send the message that the knowledge is the key which opens all doors. As the most successful Company in Serbia, NIS wants to be a leader in promoting the best examples in all fields that require our attention and represent quality towards which we stream in our everyday life and in developing our Company.”

Infobip company awarded the student of the final year with a tablet iPad Air by picking up the name from the hat ‘‘as this is the only way that the best among the best can be chosen’’ and they invited Cambridge students to return to Serbia.

Luka Babić emphasized on behalf of Infobip company, ‘‘The Dinner of PEXIM Foundation held at Trinity College is certainly a unique event which connects Serbian companies with the groups of the most talented young students. The very idea of returning students upon their completion of studies at Cambridge is noble and it promotes the idea for economic development both in Serbia and our region as the quality workers are attracted, whereas students are given the opportunity to accomplish their goals. We are convinced that in our country and concretely speaking in our company there are opportunities which will give freedom to such students to fulfil their potentials – for that very reason we have completely supported PEXIM Foundation in its endeavours.’’

Company Comfy Angel announced that they will intensively support PEXIM Foundation and by their example they will motivate other Macedonian companies to do the same. Comfy Angel exists since 2004 and their duvets and bedding programmes are the best-selling at The UK market. Irena Jakimovska on behalf of Comfy Angel said, ‘‘The motive of the company to participate on such an event was the future of the human resources in the company. The highest valued capital of Comfy Angel are the employees , so that’s why regularly we are searching for the option always to find good, well-educated and qualified employees, who, together with the management board, will help us to achieve our long term strategy. Macedonian students studying at Cambridge University can be one option for us. We hope that the work what you have started will continue and there will be more Macedonian students taking place in your project.’’

Etno Network (Etno mreža), Foodland and Tourism Organisation of Serbia gave gifts for honorary speakers at PEXIM-BSCC Dinner on May 8 and at the scientific lecture on May 9 – the artistic souvenirs made by women in rural areas, the jars of ayvar and the brochures of Serbia. Comfy Angel provided the top-rated Macedonian Tikveš Wine that guests savoured, and Foodland the organic juices of the awarded brand Bakina tajna.

Next day, on May 9, the lecture about British-Serbian friendship was held which PEXIM Foundation scholars and Cambridge alumni organised, due to the annual initiative of The Organization of Serbian Students Abroad (OSSI). The scientific lecture titled The UK and Its Allies, 100 Years after The Great War: Leadership through Peace gathered the remarkable lecturers: Dominic Lieven,Cambridge Professor from The Department of History; Virginia Crompton, BBC and British Council Expert; Aleksandar Protić, Federal Councillor of French Federation for UNESCO Clubs and Networks; as well as Simon Stockley Teaching Fellow in Entrepreneurship at Cambridge Judge Business School. The moderator of the scientific lecture was Milena Milićević, PEXIM Foundation Alumni and Lecturer at The School of Engineering Management in Belgrade.

Professor Dominic Lieven spoke about the relationship of Russia and its Allies before The Great War, during the War and in the contemporary framework, as well as how the conflicts were intertwined in the 20th century. The international audience eagerly awaits Professor Lieven’s new book about The Great War and they can also listen to him at the conference in Belgrade on May 30.

Virginia Crompton invited the lecture audience to get involved in British Council’s initiatives which encapsulate visual arts, sport (predominantly football), history and memory projects. Aleksandar Protić spoke about the international UNESCO projects, connected to The Great War and he emphasized the unique Serbian contribution to peace which Nikola Tesla and Mihajlo Pupin gave to the world, the latter being also Cambridge alumni.

Cambridge Professor Simon Stockley spoke about the innovation fostered during the various wars, while emphasizing that there is also destructive entrepreneurship. Professor Stockley opened the debate about Balkan values and how young people from Serbia and region can utilize entrepreneurship activities to contribute to peace, economic stability and country competitiveness.