Serbia and the UK United in Cambridge for the Third Time 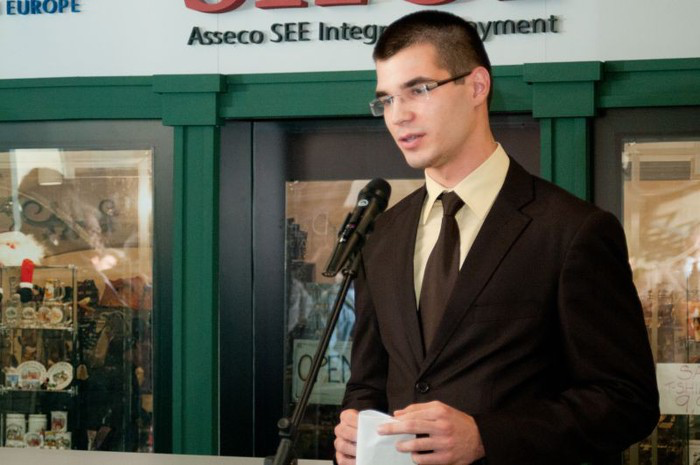 In July and August 2014, PEXIM Foundation Management Board, in close collaboration with the Cambridge Trust, selected new generation of recipients of PEXIM Cambridge scholarship.  For the academic 2014/2015, PEXIM will have three scholars: Ivona Čičković (MPhil in Economics), Miro Vukoje (MAst in Pure Mathematics), and Luka Bojović (BA in Engineering).

Ivona Čičković completed Belgrade Mathematical Grammar School and graduated from the University of Belgrade, Faculty of Economics (International Finance) with GPA 9,3.  In parallel with her undergraduate studies, she completed one-year Multidisciplinary Undergraduate Program in social sciences and the humanities implemented by the Belgrade Open School (BOS).  Ivona works as a Junior Researcher at the Monetary Strategy and Analysis Division of the National Bank of Serbia.  As a representative of the National Bank of Serbia, Ivona attended economic and econometric seminars and conferences hosted by the Bank of England, the Deutsche Bundesbank, and the National Bank of Poland.  She is a member of the volleyball team of the National Bank of Serbia.  Her goal is to be able to apply behavioural economics methods in order to explain and predict macro phenomena as to tailor adequate policies to be applied to a wider range of existent problems in policymaking.

Miro Vukoje graduated from the University of Novi Sad, Faculty of Sciences and Mathematics (Applied Mathematics) with GPA 10.  He received numerous awards from his University for outstanding results.  Like Ivona, Miro is currently employed in the National Bank of Serbia, Division for Inflation Projection and Models’ Development, where he was, amongst other things, working on a research project “Dynamic Stochastic General Equilibrium Model for Serbia” (DSGE model).  DSGE is an indispensable apparatus used in central banks throughout the world to assist the banks’ management in making coherent decisions about country’s interest rates and therefore, maintaining the price stability and influencing the future state of a country’s economy.  His short-term goal is to work in the financial sector (continue his engagement in the National Bank of Serbia or the Ministry of Finance) while his long-term goal is to become a research professor.

Luka Bojović was offered a place at the Trinity College to do Bachelor (BA) in Engineering.  He finished the Mathematical Gymnasium in Belgrade (GPA 4,95).  Luka was a member of the Student Parliament of the Mathematical Gymnasium as of 2008, as well as a member of its Presidency and the President of the Competition Board which membership base is composed solely of the students who have participated in the “Olympic” games.  He has medals from almost all municipal, regional and state competitions in mathematics and physics which he participated in and he is a permanent member of Serbia’s International Competitions crew since 2010.  Although the PEXIM Foundation decided not to pursue its scholarship program for BA studies as of 2011, we still have MoU signed with the Cambridge Trust that stipulates that for any BA candidates they will cover 1/3 of the cost (i.e. one academic year).  Thanks to donations from companies in Serbia, Luka has managed to collect the remaining funds himself which is why the PEXIM Foundation can offer him support.

In 2014, through the PEXIM Cambridge Scholarship Programme, 88,000 GBP (approximately 110,000 Euro) will be invested into scholarships for these three students.

Since its establishment, PEXIM Foundation invested approximately 460,000 Euro in scholarships for 16 students from Serbia and Macedonia.