The five-year anniversary of the PEXIM-BSCC Dinner 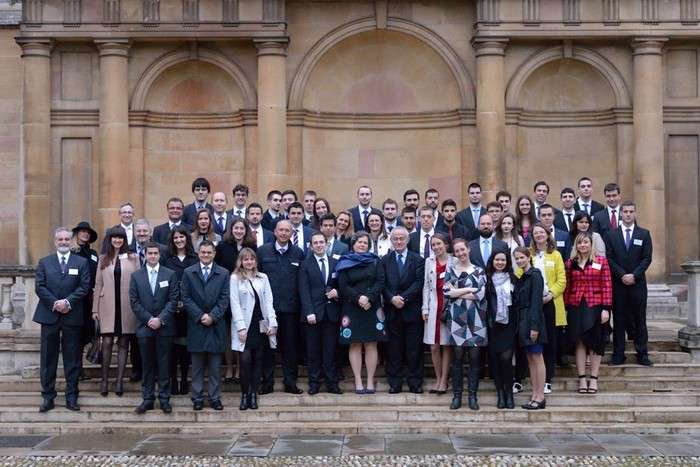 It is our a great pleasure and honour to announce that on 22nd April 2016, the PEXIM Foundation celebrated the 5th anniversary of its flagship event, the PEXIM-BSCC Dinner. The event, organised by the PEXIM Foundation in cooperation with the British-Serbian Chamber of Commerce, was once again held at the prestigious Trinity College, Cambridge.

The main goal of the event is to provide an opportunity for students from Serbia and Macedonia, currently at the University of Cambridge, to meet with distinguished people from the corporate and social sphere, as well as academia, and acquire valuable connections. The event was attended by Ms Kori Udovički, Deputy Prime Minister of the Government of Serbia, and Minister of Public Administration and Local Self-Government, Vuk Jeremić, President of the Center for International Relations and Sustainable Development (CIRSD), former Minister of Foreign Affairs of Serbia, and former President of the UN General Assembly, Adam Goral, President of Management Board of Asseco and Ognjen Pribićević, Ambassador of the Republic of Serbia to UK. Representatives of Microsoft and Bitgear, members of the British-Serbian Chamber of Commerce and Cambridge alumni also attended the event and shared their experiences with talented Cambridge students.

The event was opened by Mr Mihail Petreski, President of the PEXIM Foundation, who expressed gratitude to Mr Vuk Jeremić, as one of the first supporters of PEXIM Foundation, as well as former Director of Cambridge Trust Michael O’Sullivan and current Director Hellen Pennant. Mr Petreski equally emphasised the importance of support from Sir Paul Judge, founder of Cambridge Judge Business School and the Chairman of British-Serbian Chamber of Commerce, who was, unfortunately, unable to attend the event.

The first honorary speaker, Deputy Prime Minister Kori Udovički addressed the guests at the PEXIM-BSCC Dinner with the following message:
“The PEXIM Foundation’s program is a great example of exactly what is needed for a country like Serbia to pull forward more decisively. First of all, it is the product of civic generosity and engagement, much needed from all quarters as only a compact and activist society moves forward. Second, it focuses on including Serbia in the centre of the global community, at the very top of academic excellence. This sends a very important message that patriotism is very different from insularity. Finally, it transforms the brain drain into brain circulation. The importance of this requires no explanation. I loved spending the evening among people that so gladly get and give to this wonderful endeavour, and hope to stay a part of it”.

Mr Ognjen Pribićević, the second honorary speaker, delivered the following message:
“It is indeed a great privilege to be at this college. However, you should never forget that many young people like you have not been lucky to study at such a prestigious university. Serbia is a great country and it needs you – as well as your knowledge and determination to change things for the better. Perhaps you will recall that two years ago when we first met, I spoke of the new role of diplomacy in the contemporary world. One of the major tasks is to bring foreign investors. After two years, I am happy to say that I have started to fulfil this role, by connecting a British company with Serbian company Jumco, which is now manufacturing jackets and exporting them to US and Canada. That is the purpose of modern diplomacy and of your stay here. You are smart, well-educated and you should look after your interests. However, you should never forget how much your country needs you and how much you can do for your own people”.

Mr Adam Goral, the third honorary speaker, shared his professional experience with the students, reminiscing on the occasion when he embarked on a new assignment for a new company and managed to successfully face a challenging financial situation, while simultaneously managing important family matters. He encouraged the students to face challenges with optimism and to perceive challenges as doors that open to new opportunities.

Mr Vuk Jeremić was the fourth speaker and had the honour to deliver the closing address at the dinner:
”In an effort to contribute to a brighter future of Serbia, the Center for International Relations and Sustainable Development (CIRSD) and the PEXIM Foundation established a cooperative effort that secures a top-quality education for the country’s most promising young individuals. That being said, CIRSD is immensely proud of our joint achievements, as well as the bonds created between our two organizations. CIRSD looks forward to continued success in collaborating with PEXIM in the time ahead”.

Each year, representatives of successful companies are invited to share their experiences and network with Cambridge students. This year, the PEXIM-BSCC Dinner was attended by the representatives of the globally renowned multinational company Microsoft, as well as a young, fast-growing company Bitgear.

The representatives of Microsoft shared their views regarding the PEXIM-BSCC Dinner:
“Microsoft believes supporting students around the world in fulfilling their potentials will secure a better future for them and communities in which they live, create and work. In view of that, we are thankful for the opportunity, for years now, to attend the PEXIM Foundation’s networking event at Cambridge University. It is a great privilege and a significant learning opportunity to meet and talk to students on this occasion. However, the greatest value has been the establishment of long term relationships and many opened opportunities for future collaboration”.