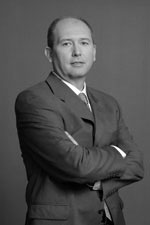 Mihail Petreski, age 60, has been either a witness or an active participant in the IT industry of Former Yugoslavia for over 30 years. He graduated from the University of Belgrade, Faculty of Economics, as International Business major, and completed postgraduate studies in the same field.

His professional career started at IBIS SYS, one of the biggest system integration companies in former Yugoslavia, specialised in postal and banking automatisation. At the age of 28, he became Sales Manager of the company in the time of dominance on the Yugoslav market and competing on international tenders for postal computerisation.

The break of Yugoslavia created a completely different business environment for the entire market. In 1991, at the age of 32, Mihail Petreski established PEXIM Computers with premises in Skopje and Belgrade, continuing his story of success in the banking sector and introducing new technologies to meet new challenges.

His leadership helped the PEXIM Group to become recognised as a leader in the markets of Macedonia, Serbia, Montenegro and Bosnia and Herzegovina based on a proprietary banking solution for core, electronic banking and business intelligence, self service banking and high expertise in networking and system integration. In 2008, PEXIM joined the Asseco Group, one of the biggest players in the European banking sector and became the strongest pillar of Asseco South Eastern Europe helping Asseco to complete its Pan European strategy.

Mihail Petreski is one of the founders of the Macedonian Committee for Competitiveness and Entrepreneurship, the advisory body of the Macedonian Government that promotes public private partnership. He is the former President of MASIT (Macedonian Association for Information Technologies) and a member and strong supporter of most of the initiatives for raising awareness of the potential of the IT industry in the region of South East Europe.