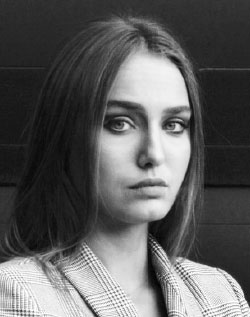 As a recipient of the CIRSD PEXIM Cambridge scholarship, Jovana completed her Master of Law (LL.M.) studies at Queens’ College at the University of Cambridge. She focused on International Economic and Investment Law related courses since it is her strong belief that, by implementing effective legislation, Serbia may steer its economy so as to minimise the government’s influence on trade, which would, in turn, ameliorate the business climate and help finalise the process of transition.

Jovana holds two bachelor’s degrees for which she studied simultaneously at two separate faculties. She graduated from the University of Novi Sad, Faculty of Law with GPA 10/10. To earn her second degree, she completed the English Language and Literature track at the University of Novi Sad, Faculty of Philosophy as the best student of her class: she was among the first to graduate, with a 9.8/10 GPA. In 2018, Jovana and three other students formed the Novi Sad’s Faculty of Law team which won third place in world rankings in the Frankfurt Investment Arbitration Moot Court Competition in Germany. Prior to this, the team placed first at the regional Eastern Europe pre-moot competition, organized in Durres by UNCITRAL in cooperation with GIZ and McDermott Will & Emery. In 2017, Jovana was awarded a scholarship to attend the Salzburg Summer School for European Private Law in Austria, following her participation in the 2016 “Ciklopea” Summer School in Zagreb. Throughout her studies, she completed several internships - most noteworthy of which was her time at the Government of Vojvodina, Ombudsman’s office, and at Schoenherr Law Office, Belgrade branch.

Her short-term goal upon completing her studies is to work for the Serbian government on developing a more adequate regulatory framework. In the long-term, she strives to become a professor, with her future career – and PhD – centring around multifaceted foreign direct investment (FDI) legislation in Serbia.