Kapital – Interview with Michael O’Sullivan, Director of COT: We want to see more Macedonians in Cambridge

Start of the Semester 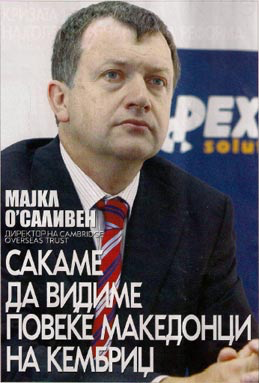 The desire of the businessman Mihail Petreski to contribute to the development of his country by helping talented young people to study at the prestigious Cambridge University began to realize.
Michael O’Sullivan, Director of the Cambridge Overseas Trust (COT) Fund for scholarships for international students at Cambridge, recently visited Skopje in order to promote cooperation with PEXIM, a private, non-profit foundation established this year by Mihail Petreski, founder of the IT company PEXIM, now part of the Asseco International group.

The purpose of the foundation is to donate scholarships for students from Macedonia and Serbia, who have been offered a place at Cambridge.  Mr. O’Sullivan says that in order to encourage outstanding students from around the world to come to Cambridge, COT is working with many partners in many countries in order to provide scholarships.  Kapital had an exclusive opportunity to talk with Mr. O’Sullivan about his cooperation with the PEXIM Foundation which provided three scholarships this year to Macedonian students who will study at one of the best universities in the world.

On which principles is the cooperation between the Cambridge Overseas Trust Fund and PEXIM Foundation based and how much of the costs of study are covered by each side?

This year, two of the Macedonian students are doing Masters studies and their fees in an amount of about 24,000 pounds are co-financed by each side equally.  In the case of the undergraduate studies, PEXIM pays the largest part of the cost, i.e. two thirds of the tuition, which in this case is about 78,000 pounds.

As a new program, one of the decisions made was that the students will receive scholarships to obtain finance at least in the amount that will reduce their costs to a level of EU and British students, because these students pay lower tuition fees than international students.  However, if they lack funds, PEXIM and COT will do whatever necessary to get the Macedonian students to Cambridge.  The two students will do their master studies in technology and policy environment, and one student will do the undergraduate studies in policy, psychology and sociology.

What obligations do the scholarship recipients have upon completion of their studies?

The PEXIM Foundation and we agreed to take care of these students once they complete the MA degree studies.  After graduation they have to return to Macedonia and to contribute with their work in the country for at least two years.  This is a two-way commitment, because we promised that, through our relationships and contacts, we will help them find suitable positions in which they can implement the knowledge they have gained at Cambridge.

That is why during mu short visit to Macedonia, we had meetings on a high level with the President Ivanov, Vice Prime Minister Naumovski, and Vice Prime Minister Pesevski.  Our intention is for them to be able to start working at an appropriate state/public institution as soon as they return from Cambridge.  If there is not such a place available, PEXIM Foundation assumes the obligation to find employment in private sector companies.  The companies that we have talked with have expressed a great interest to see our scholars in their teams.  Meaning that the key point for us is to have the students back to Macedonia and contribute to its development.

How much is your annual scholarship fund for scholarships to Cambridge?

We provide support to about 1,500 students annually from the countries around the world which are not part of the European Union.  Some of them we support with full scholarships, and some with partial.  Many of our scholarships are awarded through partnerships.  We have more than 50 partners, some governments as well as some private foundations, and international companies.

Are there many students from the Balkans who apply to study at Cambridge?

I’ve noticed that the number of candidates from the Balkans is relatively small.  I guess one of the reasons is that students think that Cambridge is unavailable due to its prices.  Of course that there is an issue of capacity and talent of students from this region, although Cambridge has a particularly high criteria for ranking students through two areas: proficiency in English, and in that respect we have somewhat higher standards from other universities.  But I think that this is not a problem for students from the Balkans, because the level of English language in this region is generally solid.  The second criteria is the high level of academic readiness that we require from prospective students.  Traditionally, Cambridge required good knowledge of mathematics and other logical disciplines, regardless of the area in which the candidate wishes to study.  Nevertheless, this also should not be an obstacle, because this region has a tradition of quality education and high academic standards.  Therefore, I think that the reasons for the small number of applicants from the Balkans are the expenses.  In addition, we should mention that for the Balkan countries that are already in the EU, the scholarship costs are lower and as a direct result more students, from Slovenia for example, came to Cambridge lately.  Also, we see more applicants from Serbia, which is due to the fact that we give more scholarships for students from this country.

Is it true that it is really difficult, if not generally impossible, for average people to enter the University such as Cambridge?

Certainly not impossible.  We have about 18,000 students at the university and 7,000 postgraduate students, half of which come from Britain, and the rest from all over the world, while 15% of undergraduate students are from outside Britain.

However, the strong reputation and great tradition, although work in our favor and open many doors, sometimes make people underestimate their chances of enrollment.  It is true that we have rigorous criteria for admission, but they are equal for all:  they cannot be easier because your father studies at Cambridge or gives money to the university, or because you are good at rugby, cricket or football, or if you are beautiful and talk nice.  You can enroll only if you are extremely smart and motivated to learn.  I often tell people that if you are the best in your class in high school or university, you might think about Cambridge, but once you get to Cambridge, it will be unlikely that you’ll still be the best in class.  However, competition is always welcomed and well appreciated.

What does it mean to have a degree from Cambridge?

I would say that it means a lot for your career.  Our statistics say that Cambridge graduates are among those who find good jobs very easily, even in times of crisis.  Most of the graduates, unless they pursue additional graduate studies, find work up to six months from the date of graduation.  I think the reasons for this are clear: no one comes to Cambridge if he/she does not possess excellent qualities.  It is clear to employers that Cambridge is a nursery of talents.  Our way of education stimulates development and individual thinking.  Our style of education emphasizes independence and creativity in thinking, probably more than anything else.

We do not appreciate the ability to store vast amounts of knowledge, but what we appreciate is the capability for radical thought, originality, and person’s ability to defend its position and to be  bold and to challenge conventional truths.  Because of all this, large number of employers are coming to Cambridge and do job interviews with students before they graduate.