Selection of PEXIM Cambridge Scholars for the Academic 2012/2013 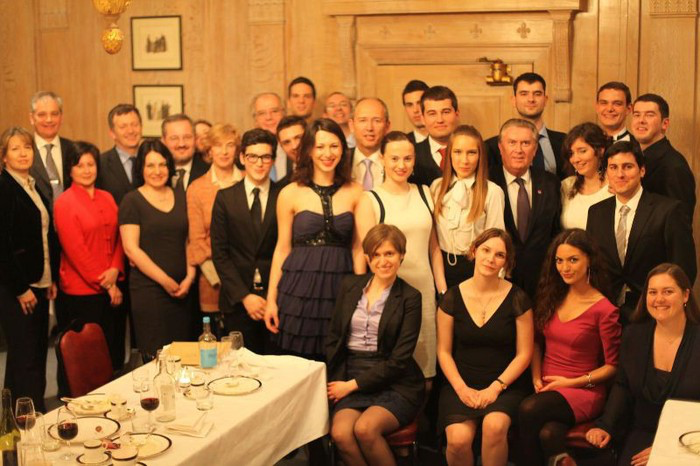 The students’ idea behind the organization of such an event was to show enthusiasm and readiness to change economic landscape of Serbia and build firmer ties with the UK on both academic and business level.  The dinner also created a networking opportunities among Cambridge students and business professionals and officials who want to help Serbia in reforms toward a prosperous country.

In his speech, Sir Paul Judge mentioned a wonderful Mathematical high-school in Belgrade from which dozens of students have been accepted to the prestigious Trinity College, Cambridge, known as one of the top math’s places in the world since the time of Isaac Newton.  He also stated that, from the BSCOC’s point of view, Serbia has a very good strategic position.  He recognized Serbia’s efforts and success in obtaining the EU candidate country status, and emphasized that it is a huge step towards the future investments in Serbia.  Finally, he referred to the students present as the future of Serbia.

Mihail Petreski, President of the PEXIM Foundation, thanked Sir Paul Judge for accepting the position of the President of the British-Serbian Chamber of Commerce and pointed out that since he took over the presidency, there is a new energy within the Chamber.  He also expressed the great honor to have guests such as the two Ambassadors and thanked them for their support.  Finally, he thanked Michael O’Sullivan for substantial support of the Cambridge Overseas Trust and for helping place eleven students to the Cambridge University, within the last two years.  Mr. Petreski also shared the history of PEXIM Foundation development.  He reflected on the hard times that Serbia went through, when many young people left the country.  Mr. Petreski chose to stay and establish his own company with the basic idea of creating an island of common sense, i.e. where good people with hard work can live their descent lives.  He realized that his biggest skill is to create a proper environment in which young people can prosper and utilize their qualities to the maximum.  The same idea was behind establishment of PEXIM Foundation: to inspire young people to use their qualities and skills to make a change in the country they are coming from.  He then thanked PEXIM students from whom the whole idea of the dinner started and pointed how this is exactly the proof that his vision is coming true.  “The PEXIM students became a good team in which many people would like to play”, concluded Petreski and added that “the job of the representatives of the governments of Great Britain and Serbia, as well as BSCOC, COT and PEXIM Foundation is to continually develop the environment where qualities of young and bright people will come to their maximum”.
Dr. Dejan Popovic, Ambassador of the Republic of Serbia to the UK reflected on the time he spent at Cambridge University.  He also acknowledged the significance of Serbia getting the status of the EU candidate and pointed out that Serbian heritage, its culture, its beliefs and its history tie Serbia strongly to the constellation of nations that have established the European Union.

HMA Michael Davenport paid particular tribute to Sir Paul Judge for injecting his dynamism, energy and vision into the work of the BSCOC from which both Serbia and UK are benefiting already.  He also paid tribute to the PEXIM Foundation and COT and pointed out that what they have done in the last two years is extremely important because of the opportunities that were given to young people, and the relationship building between the two countries.  He found education links to be tremendously important way of naturally building the relationship between countries, but also as a contribution to reforms and greater competitiveness in Serbia.

Michael O’Sullivan noted how it was a tremendous pleasure for him to work with the PEXIM Foundation’s team and that the COT has been impressed by the intellectual power of Serbian students.  He assured that this university will be open to the best and brightest wherever they come from.