In Memoriam: A Great Loss for the PEXIM Foundation; Farewell to Sir Paul Judge, with Enormous Gratitude 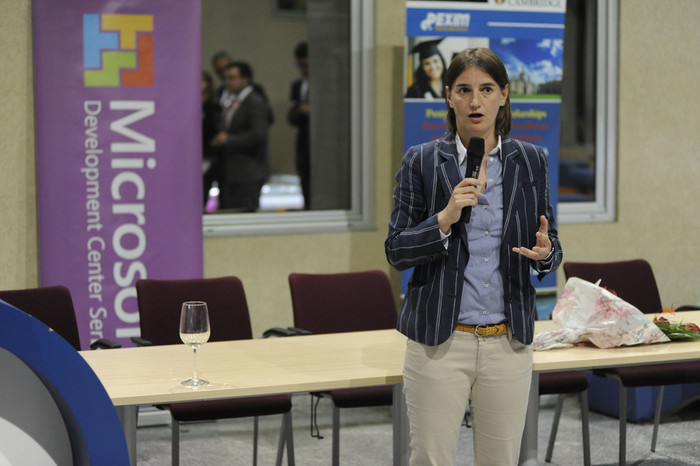 On Thursday, 8th September 2016, the PEXIM Foundation organised a networking event in honour of the new generation of PEXIM scholars. The PEXIM Foundation has the honour and pleasure to, in cooperation with the Cambridge Trust and the Center for International Relations and Sustainable Development, provide support to four students from Serbia and Macedonia to embark on master’s studies at the University of Cambridge. Among them, one student comes from the field of Law, one from Psychology, one from Urban Design and one from Technology Policy.

The reception was attended by honourable guests, Mr Denis Keefe, HMA of United Kingdom in Serbia, Ana Brnabić, Minister of Public Administration and Local Self-Government and Member of Managing Board of the PEXIM Foundation, Milan Novaković, Deputy Director at Microsoft Development Center Serbia and Zdravko Ponos, Director of Center for International Relations and Sustainable Development, as well as by long-established friends of the PEXIM Foundation, representatives of the corporate and public sector, including the British Serbian Chamber of Commerce, NIS, Nordeus, Infobip and Seven Bridges Genomics, and current and former students of the University of Cambridge.

The reception was opened through an introductory speech by Borjan Lazarević, the Executive Director of the PEXIM Foundation, who reminisced on the previous activities of the PEXIM Foundation and introduced the 7th generation of PEXIM scholars: Jelena Todić, Jovana Gjorgjiovska, Milka Dokuzova and Kosta Živanović.

HMA of the United Kingdom in Serbia, Mr Denis Keefe, shared his experience of studying at the University of Cambridge with fellow bright young scholars. HMA Ambassador noted that the work of the PEXIM Foundation is one of the best examples of how the relationship between the United Kingdom and Serbia can be developed. Additionally, HMA Ambassador emphasised what a privilege and unique opportunity it is to study at the University of Cambridge and wished the students all the best in their studies.

Ana Brnabić, Minister of Public Administration and Local Self-Government, began her address by noting that the main goal of the PEXIM Foundation is to support the talented students, in order for them to be able to come back to Serbia and Macedonia and apply their knowledge and experience. She added that she was pleasantly surprised to see that some of PEXIM’s scholars are interested in starting their career in the public sector, in order to help develop the economy of their country of origin.

Milan Novaković, Deputy Director at Microsoft Development Center Serbia, the main sponsor of this year’s networking event, addressed the guests with the following message: „The PEXIM networking event is a very special event and I think it has a deeper meaning. This is about us helping each other realise our full potential. It’s not a coincidence that the software industry is the one supporting this. The software industry is a bright spot in our society. It’s one of the rare professions here in Serbia that helps people work at a world-class level and realize their full potential. I am personally very grateful for this. It’s one of the rare industries too that succeeds in having our expats come back to Serbia, like 15 of my colleagues did. It is also a real privilege to be in a position to help others realize their full potential. Finally, it’s not a coincidence that you are the ones being supported. You’ve had many achievements here in Serbia and now abroad is the place where you can maximize your potential the most–that is fine. Some of you will return and others will find other ways to help us realize our full potential here. At that point, you’ll see how great privilege is to be in that position. Wish you the best of luck!”

Zdravko Ponos, Director of Center for International Relations and Sustainable Development noted that it was an honour to have a chance to meet and network with so many talented students. He mentioned that the first CIRSD-PEXIM scholar, Stefan Badza, had successfully finished his studies and returned to Serbia. Mr Ponos continued to say that the Center were also proud that this year’s CIRSD-PEXIM scholar Kosta Zivanovic will soon start his studies at the University of Cambridge and that CIRSD would continue to support the work of the PEXIM Foundation.

In the six years of its operations, the PEXIM Foundation in partnership with the Cambridge Trust, has provided support to 24 scholars from Serbia and Macedonia, with the total investment amounting to around 915,000 EUR. The PEXIM Foundation provides scholars with support so that upon return to their country of origin, the scholars may offer their services and talents to government institutions and employers from the private and public sector, which provides a basis for improving the economic and social climate and development of their homeland.

This event was proudly supported by