Resource for the Country’s Economic and Social Development

Internship in UBS Bank in London 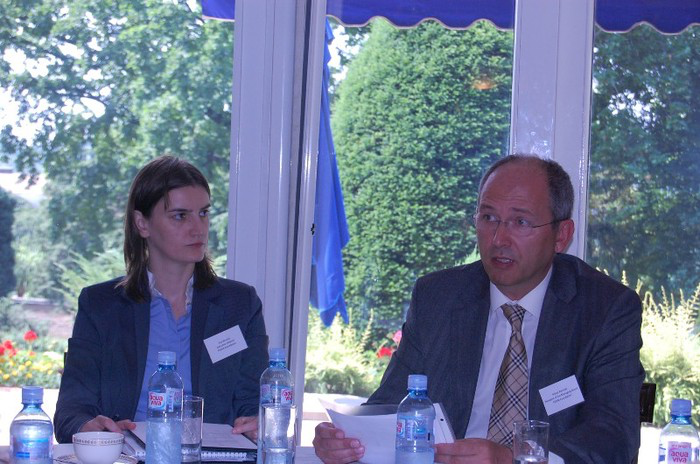 On 6 June 2011, at the residence of UK Ambassador to Serbia, Mr. Michael Davenport, PEXIM Foundation and Chevening Society of Serbia organized a roundtable which gathered representatives of leading business associations, Government of Serbia, and NGOs dealing with “brain drain” issue, to discuss cooperation on utilizing the potentials of Serbian students who are coming back after graduating from some of the most prestigious universities in the UK.  Besides HMA Davenport, and representatives of PEXIM Foundation and Chevening Society of Serbia, participants at the event included Vladimir Cupic, President of the National Alliance for Local Economic Development (NALED), Toplica Spasojevic, President of the Association of Corporate Directors, Maja Piscevic, Director of Serbian Association of Managers (SAM), Zora Krnjaic, Special Advisor to the Minister of Youth and Sports, Jovan Kovacic, President of East West Bridge (EWB), Neven Marinovic, Executive Director of Business Leaders Forum, Dragan Djukic, Head of Department for Employment and Career Planning in the National Employment Service, and others.

PEXIM Foundation and Chevening Society of Serbia will use this initiative to establish a standing dialogue and a mechanism which would increase awareness about students who are returning to Serbia each year and define what is it that they have to offer and match it to what companies in Serbia need.  In September this year, approximately 20 students who have been funded by the PEXIM Foundation and Chevening Society of Serbia are returning to the country to invest their knowledge, skills and networks in Serbia’s economy and social development.  The roundtable served to discuss how to further support them by fostering their career development, at the same time enhancing competitive advantage of Serbian businesses, organizations and institutions.  In Ambassador Davenport’s opening words: “Give people with huge potential the opportunity to learn and develop and then we can all benefit from their return”.

As a major outcome of the meeting, PEXIM Foundation and Chevening Society of Serbia will, with the support of ASSECO SEE, develop database of candidates who are returning to Serbia.  The database will provide information on the student’s achievements and aspirations, and will serve to guide a matchmaking process between companies and students.  Database will be completed by September 2011, when both PEXIM and Chevening will organize one-on-one meetings with the roundtable participants to present its features and decide on the next steps.